Home Premier League Arsenal Offer to be made to get Arsenal transfer sealed, former teammate could...
SHARE

These are the words Fenerbahce will use to convince Arsenal forward Olivier Giroud over a move to Turkey, say Fanatik.

The Turkish newspaper claim Fenerbahce manager Aykut Kocaman is looking to bring in a striker in January, as it looks likely Robin van Persie and Fernandao will leave the Yellow Canaries in the new year.

According to Fanatik, Fenerbahce are planning to make an offer for the Arsenal striker, and will be looking to take advantage of his situation with the Premier League side. 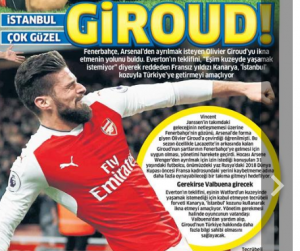 Giroud has been used sporadically by Arsene Wenger since the start of the season and the French striker could look to leave Arsenal to get more playing time at another club.

Fanatik say Fenerbahce are looking to convince Giroud by using the charm of Istanbul, and they are also seeking help from Mathieu Valbuena, who is a former teammate of Giroud with the French national team

Giroud has also been linked with a move to Everton, but it seems Sam Allardyce has finally found a striker to lead the line in Cenk Tosun from Besiktas.