Home Europe Offer ‘ready to be put on the table’ to secure Liverpool transfer,...
SHARE

Wednesday’s edition of Catalan newspaper Sport went confident on Coutinho to Barcelona, as it often does, and claimed a deal is pretty much in place.

Sport stated personal terms are all agreed and sewn up, something they’ve stated countless times since the summer transfer window, and stated Barcelona would pay Liverpool something like €150m including bonuses, with the payments spread out over the period of the player’s contract.

Thursday’s edition of Marca, a more Madrid leading newspaper, has it very differently indeed. As they have often been, Marca are far calmer on Coutinho’s chances of moving from Liverpool to Barcelona in the January transfer window.

Marca state Barcelona haven’t managed to advance their Coutinho aims, and that’s because Liverpool simply aren’t responding. Barca are ‘knocking on the door’ but so far Liverpool have refused to even open it. 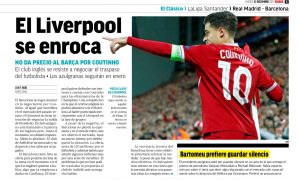 Going completely against Catalan claims, Marca say Liverpool are determined not to sell Coutinho and want him for the next round of the Champions League.

Barcelona’s offer is ‘ready to be out on the table’ to secure the Liverpool transfer… once the Premier League club agrees to talk.

Marca believe that offer to be €120m plus a series of bonuses.