Fotomac claim Galatasaray are interested in signing Manchester United midfielder Hannibal Mejbri on a loan deal for next season.

It’s reported the Turkish side have made a loan offer to Manchester United and they are waiting for an answer from the English side about the young midfielder.

Gala are looking to add to their squad ahead of the window after narrowly missing out on the Super Lig title last season.

Manchester United paid €10m for Mejbri, to sign him from AS Monaco in 2019 and the Tunisian player could possibly go out on loan this summer to get regular first team football next season.

According to Fotomac, Ole Gunnar Solskjaer is keeping a close eye on Mejbri’s development, and he could allow him to join Galatasaray on a loan deal.

It’s unlikely he’d get many 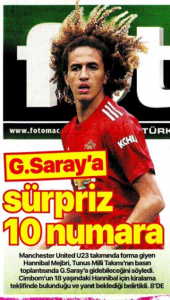 opportunities next season under the Norwegian and a move to the Istanbul side would give him the chance to play in Europe.

The 20-year-old is contracted to the Red Devils until June 2026.