According to Turkish newspaper Sabah, Besiktas have made a loan offer to Everton for Yannick Bolasie.

The 30 year old isn’t part of Marco Silva’s plans and Sabah claim Everton are looking to offload him, like last season.

Last season the DR Congo international was loaned to Aston Villa and then Anderlecht, and Sabah say Besiktas manager Abdullah Avci is keen to sign the player on a temporary basis.

It’s reported Avci is particularly impressed by Bolasie’e versatility and is planning to use the former Crystal Palace player anywhere across the front three for next season.

Bolasie is also said to be keen on a move to Turkey and Sabah report Besiktas are hoping to make progress in transfer talks over the course of this week. 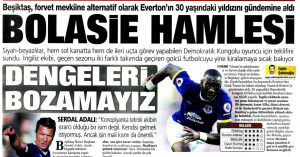 Since arriving at Goodison Park, Bolasie has failed to a make an impact which wasn’t helped by a serious knee injury he sustained in his debut season with the Merseyside club.

The attacker still has two years left on his current contract with the Premier League club.