Napoli fired Carlo Ancelotti last week after the manager had secured their progress to the next round of the Champions League with a 4-0 victory over Genk.

It was widely reported in Italy prior to the match that Ancelotti would be getting the boot regardless of what happened and would then be replaced by Gennaro Gattuso. There was no immediate impact with Napoli losing 2-1 at home to Parma on Sunday.

Now that Ancelotti can’t be blamed, the club’s midfield is in even sharper focus. Monday’s edition of Gazzetta dello Sport reports that ‘in recent hours’ directors of the Serie A side have contacted Arsenal and presented an offer for Lucas Torreira.

The deal would see the Uruguayan move on an 18 month loan, for which Arsenal would be paid €3m. At the end of that loan there’d be a mandatory purchase option of €27m.

Effectively, it would be a €30m permanent transfer but allow Napoli to count it on their books at a later date. 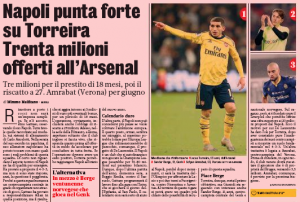 Arsenal are in charge of the next step, with those in Naples now waiting to see what the answer from London will be.