Thiago Alcantara’s potential move to Liverpool is set to pick up pace in the coming days, report SportBild in their magazine this week.

Ever since Thiago told Bayern Munich he didn’t want to continue with the club beyond this summer, the German media have been adamant that Anfield is likely to be his next destination.

At first that brought multiple denials from media closer to the Premier League champions, yet that position has somewhat softened over the past week or so. It’s appeared that Thiago has been pushing the transfer himself, rather than Liverpool coming up with the idea independently.

However, given the high level Thiago has shown, that Jurgen Klopp’s side would be receptive to such overtures isn’t surprising.

SportBild state an offer from Liverpool is now ‘expected’ and transfer negotiations will commence this week, so everything is getting imminent. 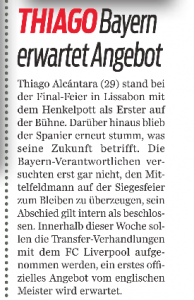 There’s no indication of transfer fee, or what the English club are ready to offer. That could be where this one faces difficulties, with Bayern holding out for at least €30m.

Should Thiago be insistent that it’s Liverpool, and only Liverpool, he wants then Bayern may have to be flexible given the Spaniard’s contract expires in less than a year.

The idea of a change of mind, and subsequent stay at the Bundesliga side, is dismissed.