Home Europe Offer for Celtic player to be made ‘in coming days’ – Club...
SHARE

For the past two transfer windows there’s been claims in the Portuguese media that Porto want to sign Olivier Ntcham from Celtic.

According to those claims, the player has been keen on the move but Celtic weren’t so keen to do business, especially on the terms that were being offered.

Claims this week from Scotland have quickly made their way to Portugal and it’s a big deal.

A Bola give it a full page on Friday, and explain Porto are in a hurry to get business done.

They state: ‘Sérgio Conceição is a deep admirer of the Celtic midfielder’ 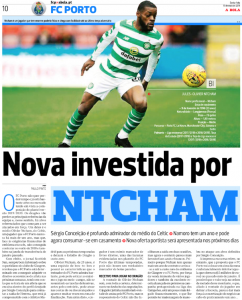 And then follow it up with the slightly dodgy sounding: ‘Dating has been going on for a year and can now be consummated in marriage’

Porto are set to lose players, including midfielder Hector Herrera, who has been a hugely important player for the club.

He’s going on a free transfer so they want a bargain purchase in for the middle of the pitch, that’s partly why any offer to Celtic, which is set to be made ‘in the coming days’, isn’t going to be very high.