Home Europe What are the odds on that? – Wolves fake news shows how...
SHARE

Despite a wave of nonsense often carrying transfer rumours, sometimes something stands out. For how blatant it is, for how easy it is to disprove, for how much impact it has.

Football supporters are fed false information, sometimes downright lies, and are increasingly encouraged to bet on an outcome. ‘Next manager’ markets have been a cause of eyebrow raising for some years, and transfer markets have recently come more into it.

A vaguely reasonable transfer rumour will appear… and then all hell will break loose.

That was the case with Diego Costa recently. He’s been involved with Jorge Mendes, he’s a native Portuguese speaker… so if he leaves Atletico Madrid then a reasonable destination is Wolves, right?

Maybe it is, maybe it could happen, yet what happened last week has no basis in reality.

First, a Twitter account called Football Daily (with over 70k followers) posted a fake quote from Jorge Mendes. As you can see below, they gave a clear idea of Wolves as a destination. So what happens then? Betting markets are impacted.

Football Index begins to move. That’s basically a stock-market of footballers, you can trade players and make real money.

Costa’s value went through the roof because he was being linked with a return to the Premier League. Anyone with money invested in the player will have turned a quick profit. The reaction wasn’t quite enough, perhaps.

So Football Daily then posted a tweet which stated Globo Esporte, one of Brazil’s major sport media outlets, had claimed Costa and Wolves were in agreement on personal terms.

They presented it with the Atletico player half in a Wolves kit. Some work went into this. 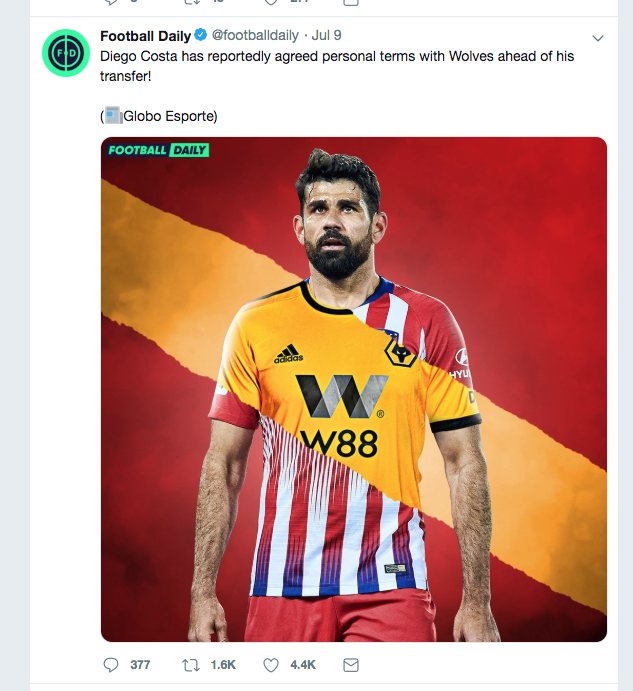 Then it became massive, as was the intention.

It was everywhere, all over the world sport media. The odds on Costa moving to Wolves ended up as short as 1/4, people were clearly putting money on it.

Yet it was fake. At Sport Witness we were aware at this stage that Globo Esporte hadn’t  claimed anything of the sort.

We said so, as clearly as possible.

But, still, it flew around the world, and the bets were piling up. People were putting actual money on an outcome based on a downright lie.

So we contacted Football Daily, to suggest it was time to come clean. Nothing in response.

At this point it was a buzz story, money was being placed and stories were even being born from the odds: Wolves ‘favourites’ to sign Costa / Costa 91% likely to join Wolves.

Despite knowing the Globo Esporte claims were lies, we also contacted them. It was partly their reputation on the line, through no fault of their own.

Normally, Globo wouldn’t comment, but that we have someone in Brazil, with connections at the huge media house, helped.

For clarity, this was their denial: ‘Globo Esporte confirms that we did not give this information’

Next, we contacted some of those benefitting and told them the story, that it’s fake, that their customers are being encouraged to part with money based on lies. One major odds aggregator told us ‘we won’t be commenting officially on the story mate’ and gave no reply to our follow up question of it being in the interest of their customers.

They continued running the market as normal.

Following on from that, we went directly to the major betting company whose odds had shortened most dramatically. At 1/4, it doesn’t take too much assumption to believe they’d taken money on this market.

Thirteen hours later they replied: ‘Hi, sorry for the late response, I just wanted to check with our traders. They have told me we have never offered odds on Diego Costa for *********. Was it ********* you saw the odds on?’

When they were informed it was indeed their company and we’d taken screenshots to prove as much, there was no further reply.

All the while, Football Daily kept their posts up despite knowing they were pushing lies.

After the story peaked, and the interest faded, the tweets were deleted. We again asked for comment, and had zero success.

So what of it? Well, football rumours are often false, but there’s a huge difference between that and making such an effort to build up a downright lie.

If it were a prank, one would think the reaction to the betting market would be enough to produce an admission, to avoid followers losing money. Despite our request for them to take that way out, they left it there until the story had died.

Bet on whatever you like (we have an indirect deal with several companies), but be aware of downright and seemingly purposeful lies.

Otherwise, you’re being played. And there doesn’t seem to be any regularity body who cares.

And if you want to know if a world news source has said something they’ve been claimed to say… well that’s what we’re here for.