According to claims in France, Stade Rennes are interested in West Ham winger Sofiane Feghouli, but the odds are stacked against the Brittany club.

The Algerian international could leave the Hammers this summer, and he’s also been linked with Galatasaray.

L’Equipe today reported Rennes have contacted Feghouli’s agent with regards to a move back to France. Rennes are hoping they can loan the player, but it’s unlikely West Ham would agree to such a deal. 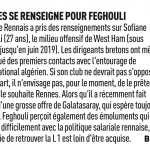 Feghouli has already received a big offer to sign for Galatasaray after weeks of talks between West Ham and the Turkish giants.

We recently covered reports from Turkey that Galatasaray have offered €3.2m per year to Feghouli, which is €500K more than their initial offer.

It was claimed the West Ham attacker is close to joining the Turkish club, but a deal has yet to be finalised.