Christian Karembeu remains a big figure in French football given he was part of the country’s World Cup winning squad in 1998.

Having also been successful with Real Madrid, he pops up every now and again doing interviews. And if a Spanish newspaper speaks to a former French midfielder, then it’s pretty certain Paul Pogba is going to be dragged into the conversation.

That’s been the case as Karembeu has spoken to AS this week, with the 48 year old being asked if he’d like to make the Real Madrid team better with his compatriots Pogba and Kylian Mbappe.

The Manchester United player was repeatedly linked with a move to Real Madrid during the summer transfer window, as manager Zinedine Zidane very much wanted the deal done.

With the Old Trafford club set against a sale, Florentino Perez didn’t seem to make much of an effort, and Pogba remained at Manchester United as the window closed.

Karembeu clearly thinks he’d be a great signing for Los Blancos: “It’s obvious. Pogba is a giant. Before there was talk of galacticos, he is a giant. What other galactico is now like him? But it depends on Florentino, he always wants the best. It also depends on the 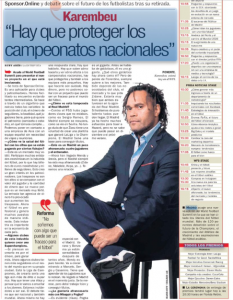 needs of the club, the market and what Zidane asks. It would be great if both were on the Real Madrid agenda. If we talk about pure talent they can arrive. Madrid has already made many efforts to bring Hazard, but it is not known what can happen in December or next summer.”

There’s now talk of a new contract for Pogba at the Premier League club, and with rumours Jose Mourinho could be in line for the Madrid job if current difficulties continue, the transfer doesn’t look any likelier.