Marseille’s season isn’t quite going to plan, which feels like something of a habitual situation for the south of France club.

Big plans and relatively big investment haven’t led to the progress which was hoped for and now ahead of future markets, they need to sell to be able to buy, both in terms of raising transfer fee and making room on the wage bill.

Florian Thauvin is already being earmarked for sale, but L’Equipe reports there’s other players who have a market, in terms of clubs being interested in signing them.

Morgan Sanson is again said to be of interest to Spurs, with the French newspaper saying the midfielder is ‘observed by Tottenham’. 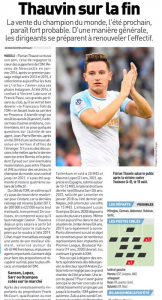 The estimated value of a transfer is put at €20m, which would likely draw confused faces from Marseille fans who think he’s one of the club’s better signing in recent years.

This all seems at arm’s length right now, but if Tottenham are genuinely keen on the player then Marseille’s sales outlook only improves their chances.