Last week claims came from France that an English had made an offer for Matteo Guendouzi.

Tottenham have been repeatedly linked to the 18 year old for over a year, and with the €5m offer coming from an unnamed English side, there was a good chance it was Spurs finally moving on their interest.

Lorient knocked the offer back, and are believed to want as much as €9m for the player, which would be a big transfer for a side in France’s Ligue 2. Guendouzi is currently frozen out at the club, having refused to renew his contract which ends in 2019.

L’Equipe have a little piece on the matter in their Sunday edition, and, despite Tottenham being the likeliest suspect, the French newspaper drop a hint the offer hasn’t actually come from them.

It’s stated a ‘mid-table’ Premier League club made the approach, which, unless L’Equipe are being especially harsh, would rule Tottenham out. 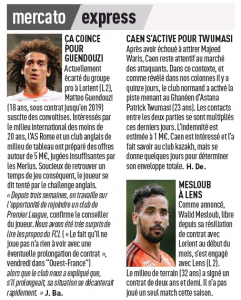 The player’s agent is quoted as saying: “For three weeks, we are working on the opportunity to join a Premier League club.”

Should Tottenham be as keen as all the previous reports would suggest, then these developments are certainly a nudge for the club to do something about that interest, before Guendouzi joins another English side.