The German goalkeeper terminated his contract with the Black Eagles this week, and Goll said he’ll now return to Liverpool. There were recent reports the Super Lig side owned the keeper unpaid wages.

Besiktas do have a right of redemption with the Liverpool owned player but due to their financial situation he will be heading back to Anfield. 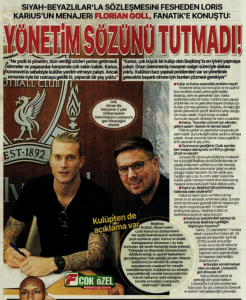 However, his future looks uncertain on Merseyside and if he did remain with the Premier League club he would be back up to Allison.

There have been reports he could head back to Germany after making his name with Mainz.