‘Now or never’ is splashed on the front page of today’s edition of AS as the newspaper states Zinedine Zidane knows the next transfer window is the ‘last chance’ for Real Madrid to sign Paul Pogba.

Manchester United, on the other hand, have initiated renewal talks with the 27-year-old as they are aware that if he doesn’t sign a new deal, it would be better to cash in from his sale in the summer.

The midfielder’s contract with Ole Gunnar Solskjaer’s side lasts until 2021 and the Red Devils have an option to extend it by a year.

Should United exercise the option to extend Pogba’s deal by a further year, sources close to the France international are claiming ‘it would only serve to upset the footballer and force him out, or to leave a year later hopelessly.’

Therefore, AS believe United are obliged to see if they can find an agreement for a long-term contract so that Pogba doesn’t enter into the final year of his current contract.

If this situation arises, it’ll be an ideal scenario for Real Madrid, especially when the relationship between Pogba and United is hanging by a thread and his agent, Mino Raiola, is accused of ‘creating a culture of division’.

Pogba is currently valued at €100m and his price could drop further, ‘depending on how the Coronavirus crisis affects football finances’. 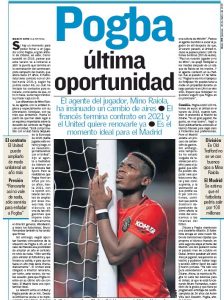 AS reckon the summer window will be the right time for Real Madrid to sign Pogba, who remains a great desire for Zidane.

Forward reveals he signed Norwich contract and ‘sent everything back in...