Adrian gets Marca’s back page on Wednesday, after speaking to the Spanish newspaper’s radio station on Tuesday.

The 30 year old has found himself second choice at West Ham to Joe Hart, on loan from Manchester City, and isn’t content just to accept the situation.

Slaven Bilic’s decision to bring Hart in suggests Adrian doesn’t have a good chance of getting in the first team.

The England international would have to put together a string of particularly poor games, or pick up an injury, for Adrian to be first choice again, and the Spaniard is well aware of that.

With a contract ending in June, Adrian has a clear exit route, and next summer West Ham could be left without both Hart and their current second choice.

Speaking to the Spanish radio station, Adrian explained: “The coach isn’t giving me much ball, although my data for the last four seasons is there and I will continue fighting.” 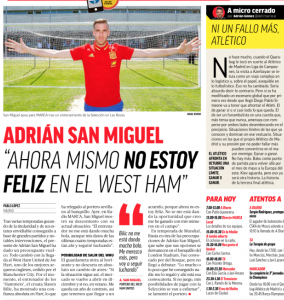 That suggests Adrian feels harshly treated, based on his own statistics, and he went on to say: “If the situation continues, the market opens again in December and if not, in the summer.

“I have one year left, so we have to reach an agreement, because now I’m not happy.”

Adrian still has outside hopes of a Spain recall, and that’s impossible if he’s on West Ham’s bench.