If you’ve been reading our coverage of Jerry Mbakogu over the past six or seven months, it may have come across that we became tired of the whole situation around June.

It’s been a transfer saga seemingly without end.

First there was an agreement for a transfer at just over €3m which Leeds United had until the end of June to activate, and they missed that.

Meanwhile, the Yorkshire club were telling their own local media the whole thing was off, whereas Carpi’s local media were being informed there was a new verbal agreement, at a lower fee, which lasted until the end of July.

On July 4th, Gazzetta di Modena reported Carpi were confident the verbal agreement would be kept to, because ‘around the table Italian is spoken and strangers do not sit’.

It was explained there were links between several people involved in the negotiation, and Gazzetta suggested Andrea Radrizzani continues to have relations with Football Capital, an agency he gave up shares in to buy Leeds United.

The end of July came and went, and on Thursday it was reported by Gazzetta di Modena that Mbakogu is rescinding his contract with Carpi, making him a free agent. 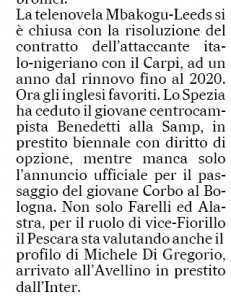 There’s no drama from the Serie B side, which seems quite odd given the striker is surely worth something. Friday’s edition of the same newspaper just speaks of a ‘farewell’, like footballers walking out on their contracts is an everyday thing.

Il Mattino have their own take, reporting: ‘The soap opera Mbakogu-Leeds closed with the termination of the contract of the Italian-Nigerian striker with Carpi, one year after renewing it until 2020. Now the English are favourites.’

Are they saying Leeds United are favourites? Honestly, we have no idea, but this whole mess must come to a conclusion soon.

Club have ‘€15m offer’ from Southampton for defender – ‘Exchanges could...