Home Championship Nottingham Forest ‘will not advance’ to buy midfielder, despite previous links with...
SHARE

Just a couple of weeks ago, we had seen the Portuguese media insisting that Nottingham Forest would try to keep Filip Krovinovic in their squad.

Following the midfielder’s loan spell from Benfica, the Championship side would now try to find a new deal to have him for one more season.

The rumours, however, have been vanishing, and Nottingham Forest’s chances of signing Krovinovic aren’t even considered by local reports.

As newspaper Record writes about the player today, they say he should be sold by Benfica, and the English club ‘will not advance’ to buy him. 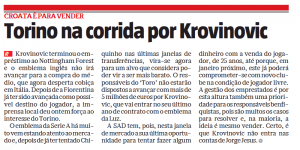 Kronivovic is now linked to Serie A sides, with reports from Italy claiming the likes of Fiorentina and Torino are both interested in his signing.

Since he’s entering the final year of his contract with Benfica, the Eagles want to find a deal before he becomes able to sign a pre-agreement with another club and leave the Lisbon side for free.

Even though that sounds like a good opportunity for Nottingham Forest to land him permanently, that doesn’t seem to be a possibility anymore, with more attractive avenues opening to him.