Benfica youngster Jota is eyeing up a move to Nottingham Forest this summer, with the Championship side having already ‘shown interest’ in him.

That’s according to Record, who say the 21-year-old would prefer a move to England over options next season.

The right sided midfielder has managed 19 appearances in all competitions this season but only 547 minutes of football, playing a peripheral role in Benfica’s squad.

With Pedrinho set to arrive in the summer, his prospects of first-team football could be further limited, and as such, both he and Benfica are eyeing up a loan deal elsewhere.

While Benfica view him as a player for the future and signed him to a new deal with a higher termination clause in January, they see a loan move as an ideal option for him to continue his development.

There are clubs interested in him, namely Nottingham Forest, who have already ‘shown interest’ in signing the Portugal Under 21 international.

He’d be open to the move too, with Record expla 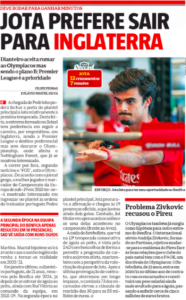 ining his ‘preferred destination’ would be the Premier League but he is open to the Championship also.

He has already ‘aligned’ with Nottingham Forest, although Olympiakos are also keen.

A move to the Greek side will only happen if the ‘English dream’ doesn’t happen, though, seemingly putting Forest at the front of the queue at this moment in time.