Burke was one of the hottest prospects in European football after breaking through into the Nottingham Forest first team in 2014.

A series of impressive performances had several of the top sides in Europe chasing his signature, a race that RB Leipzig eventually won.

The Bundesliga side paid £13.68m for the Scot, hoping they could develop him like the plethora of other young players who have shone for the club.

Things did not work out, though, with him managing just one goal and two assists in 26 games for the club.

Since then, Burke’s career has struggled to take off, with a permanent switch to West Brom and loan spells at Celtic and Alavés failing to kick things off.

He’s now at Sheffield United, who paid £5.85m to sign him from the Baggies in September, but things are yet to get going, and Montanier is less than impressed.

“I think they are often mistaken, yes. Only the financial proposals of the big clubs are sometimes so interesting … Also for the parents,” he told Het Laatste Nieuws.

“At Nottingham Forest, I worked with Oliver Burke. A great talent. Suddenly all the planet wanted him. Oliver said to me, ‘I’ll stay.’

“Until one day I got a phone call. ‘Coach, sorry, but I’m on a plane (to Leipzig).  With this contract, I can secure the future of my family. ‘

“But look at the evolution of his career. I always take the example of Zinedine Zidane. 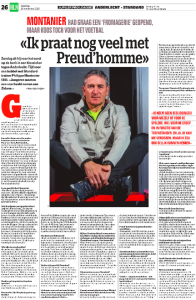 “He made his Cannes debut, went to Bordeaux and when he was an adult player he moved to Juventus. Real Madrid followed later.

“He did it step by step and patiently.  Do you know what to do?  Map all young Belgian football players who left abroad at a young age.

“For the three or four who have passed, there are fifty that you will not hear from anymore.”