When we tweeted about Nikola Vukcevic’s transfer from Braga to Levante this Wednesday, a Nottingham Forest fan asked: ‘Did Forest ever bid for him?’

Now we have the answer: they did. At least according to what Portuguese newspaper Record is saying today.

As the outlet writes the details of the player’s move to Spain, they make it pretty clear that the chance for Vukcevic to move to Nottingham Forest was pretty real.

Record claims that there was a ‘very appealing’ offer both for Vukcevic and Braga from the Championship side. But what really weighed on Levante’s side was the fact that they’re playing La Liga’s first division. 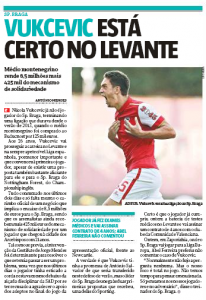 It’s claimed that the negotiations have been closed in the past few days, and the Spanish side will be paying €8.5m for the transfer.

With the player pushing for a move, Record reports agent Jorge Mendes was crucial to getting things done and finding a good fee for the player.

So although it seemed that Nottingham Forest couldn’t match Braga’s demands at first, maybe the real problem was playing in a second tier.