Nottingham Forest have given up on the signing of Sporting midfielder Bruno Paz, according to claims from Portugal today.

Newspaper A Bola says the Championship side couldn’t offer what the Lions are demanding for the player, so his destination should be somewhere else.

It’s said that Sporting wanted €3m for 70% of his rights, and Nottingham Forest have only put €1.5m on the table, staying far from a reasonable amount.

The Lisbon side are now waiting for other offers for the midfielder. He’s already turned down bids from Brazil, and is currently wanted by clubs from Germany and from the Portuguese second division. 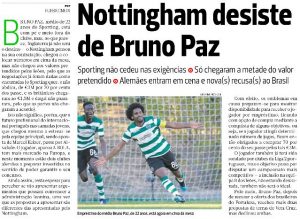 Nottingham Forest’s interest in Paz has been reported since May. From the outset, A Bola had claimed that the Championship side were offering half of what Sporting demanded.

The Lions could now let him go on a loan deal aiming for a future permanent transfer, and it’s unlikely he’ll stay at Alvalade for next season.