Nottingham Forest are keen on a deal for Sporting midfielder Bruno Paz but could face competition from Brentford for his signature.

That’s according to A Bola, who say Forest have ‘already gone from words to deeds’ in the race for the 22-year-old’s signature.

They have made a ‘proposal’ to the club’s administration, but their initial bid did not satisfy what Sporting are looking to make from a sale.

Nottingham Forest’s initial bid was only £1.5m, half of what Sporting are looking for.

Forest have not given up on signing the midfielder, though, and are now ‘studying the best way’ to propose a new deal to the club as Paz is a player who ‘interests the club a lot’.

They have been made aware of interest from other clubs, though, namely Brentford, who are planning to put an offer on the table, although what price they will offer isn’t yet known. 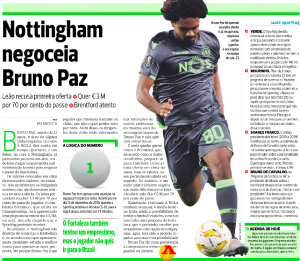 Sporting have made it clear that it is ‘difficult’ for them to sell Paz for less than £3m.

Whether Nottingham Forest or Brentford are willing to pay that price is as yet unknown, although perhaps now they know of each other’s interest, that may force them to pay up rather than losing out.