The striker has made 23 appearances in the league, but it includes only seven starts and only 64 minutes of action in this calendar year. He has three goals and an assist to his name.

This week’s edition of SportBild claims the 32-year-old’s chances of featuring regularly for the club look slim, which is why he ‘definitely wants to leave’ the Bundesliga side this summer.

It’s claimed the player earns around €2.5m per season with his current employer and has a contract with them until 2021.

According to the report, there has been ‘enquires’ from the Championship clubs, who could miss out a place in the next season’s Premier League and would be eager to make another attempt next season. 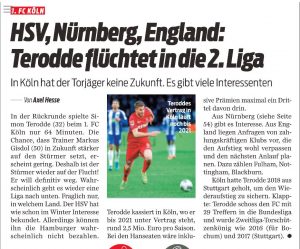 That’s when Nottingham Forest, Blackburn Rovers and Fulham get a mention, and apart from the three English clubs, SportBild add Terodde is also attracting interest from 1. FC Nürnberg.