Home Premier League Chelsea “Nothing to do with the manager” – Chelsea star doesn’t blame Lampard...
SHARE

Finding the back of the net against Newcastle United on February 15th, Timo Werner put an end to a very long streak of not scoring in the league for Chelsea.

Previous to that strike, his last goal in the Premier League had come in a 4-1 win over Sheffield United back on November 7th, and to say there was a relief was an understatement.

The player sat down this week for an interview with Kicker, where he revealed the feeling that overcame when the ball crossed the line.

He said: “I am glad the long thirsty stretch is finally over and that I scored again, and I hope this will be the case again on a regular basis now. It’s hard to say why [it happened]. First and foremost, of course, because of my performance, which wasn’t always right, but there also some bad luck.

“I think I’m the player with the most post or crossbar hits in the Premier League. I scored offside goals that were pulled back by VAR because of two or three centimetres”.

It’s fair to say the appointment of Thomas Tuchel at Stamford Bridge has gone a long way in helping the German international recapture some form, although the striker had few bad things to say about Frank Lampard, under whom he spent a large chunk struggling.

He explained: “The fact things didn’t go well for me had nothing to do with the manager because I got off to a flying start. He’s a huge personality, I have a lot of respect for him and I’m grateful to him for bringing me to Chelsea. Under him I got to know the English way of playing, and it was definitely good for my game that I learned to work more with my body and to give me. He kept asking for that”. 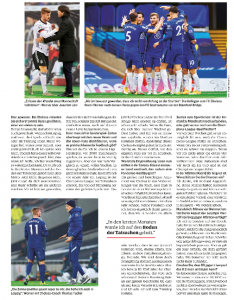 As for the impact Tuchel, a German speaker, has had: “That’s definitely a huge advantage for me and all other German-speaking players. Even though I work a lot on my English, I was not always able to express myself the way I wanted and had to be careful not to be misunderstood. This is, of course, no longer a problem with the new manager. You almost feel a bit at home”.

One of the major drawbacks from Werner’s first season at Chelsea has been the lack of fans at Stamford Bridge, which the player calls ‘a shame’, and ‘there is no substitute for the feeling of scoring a goal in front of your own fans’.

He’s also felt a little bit lonely in London, which he’s not really been given the chance to explore, but he knows ‘that will change in the future’, having signed with the Blues for the next five years.

Plenty of time to score a lot of goals.