Home Europe “Nothing is impossible” – Leicester City star speaks about transfer back to...
SHARE

It’s hard to exaggerate how bad the situation is at Sporting right now.

Just over the past week or so, the club’s president Bruno de Carvalho suspended manager Jorge Jesus, then brought him back when he realised there was a cup final to plan for, then masked hooligans raided the club’s training and beat up several players and Jesus, with some claims Bruno was behind it, and then several officials were arrested over match fixing allegations, with a whole series of private messages coming to light detailing bribes.

Today’s Taca de Portugal final against Aves therefore takes on a whole new level. Bas Dost has been training with a green bandage on his head, after having six stitches when one of the thugs whacked a belt buckle over his skull.

Portuguese newspaper O Jogo have managed to get an interview with club hero Islam Slimani, now at Leicester City, and asked him to comment on the situation: “Sporting is above all and that is the most important thing.”

After that snippet of nonsense, Slimani was asked if he keeps the club in his heart, and 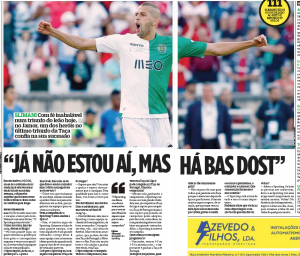 whether he’d fancy returning there at some point: “I love Sporting. If people know me today, I owe it to Sporting.

“It was a very important step in my career. Return? In football, nothing is impossible… I hope to return one day, of course, because we are talking about a club that I like a lot.”

Turning 30 years of age next month, the Leicester City player still remains out of Sporting’s price-range.

The striker’s Foxes contract runs out in 2021, when he’ll be 33, so there’s a possibility of a return to Lisbon at that time.