Home Europe “Not yet 100%” – Star gives update to player’s chances of joining...
SHARE

Antoine Griezmann helped Atletico Madrid win the Europa League as he scored twice and registered an assist in the final against Marseille in May. The France international’s display for Diego Simeone’s side last season has seen him receive praise from Barcelona star Lionel Messi.

The Argentine international gave an exclusive interview  to Catalan newspaper Mundo Deportivo. During the course of the interview, Messi was asked about Griezmann, who has been heavily linked with a move to the Camp Nou this summer.

Messi hailed the former Real Sociedad star and said the Atletico star is going through an “outstanding” phase in his career. The Barcelona forward also stressed that he will have no issues in getting along with Griezmann, if he joins Ernesto Valverde’s side.

Messi also believes Griezmann “is not yet 100%” sure of joining the La Liga winners this summer.

“I always say. It is easy to understand good players and [Griezmann] is one of the great players. He is going through an outstanding phase in his career. The coach will then look at how he fits everyone in but he is obviously a great player and we would click together,” Messi told Mundo Deportivo. 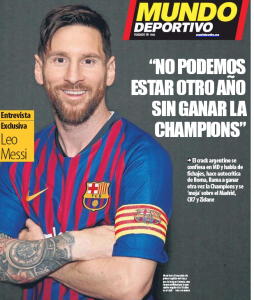 “Whether Griezmann will come or not? It depends on the people who take the decision on signings. He is not yet 100% [sure of joining Barca]. But the more quality we have, the better it is for us. We want to be the best team in the world and for that we want to have the best players.”

Cadena COPE reported that Atletico are optimistic and confident the Frenchman will sign a contract. The Spanish capital club are ready to offer him an annual salary of €23m net, if he agrees to a new deal.