Dedryck Boyata wanted to leave Celtic a year before he did.

The defender gave enough hints to the Belgian media ahead of the summer, and then had more involvement during the World Cup than had been expected.

His agent spoke out about the situation, and said Celtic hadn’t kept their promise of being open to a sale for the right price, claiming the Scottish Premiership club had been refusing talks with other clubs.

At the time, Brendan Rodgers made it clear that whilst Celtic weren’t completely closing the door on the player’s exit, the club had to look after its own interests. That would mean being able to bring in a replacement, and the scenario didn’t present itself.

Therefore, Boyata left Glasgow for Hertha Berlin on a free transfer earlier this summer. It perhaps wasn’t the level of move he’d have been chasing, with previous links to clubs such as Sevilla and Lazio, but he’s enjoying the Bundesliga at a club where a lot is expected of him.

Speaking to this week’s edition of SportBild, the 28 year old wanted to put the record straight, as he sees it, about what happened last summer, and denied there’d ever been a strike or that he’d tried to force a move. 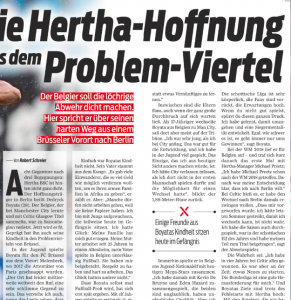 “It’s not true, I was accused of strikes last summer so I could move. I also played through the season, was in the Scottish team of the year and played my part in the title.

“The truth is, I’ve won everything at Celtic in four years. But it was time to start something new. The Bundesliga is a good challenge for me.”