Liverpool’s 3-0 victory over Leeds United at Elland Road was overshadowed by the serious injury sustained by Harvey Elliot.

The 18-year-old suffered a serious ankle injury midway through the second half following a challenge from Whites defender Pascal Struijk.

Marcelo Bielsa’s man was shown a straight red, while the midfielder, who immediately received medical attention, had to be stretchered off the pitch.

Elliot will have to undergo surgery in the coming days and is expected to spend a lengthy spell on the sidelines.

Struijk, who came on for injured Diego Llorente in the first half against the Merseyside club, took to social media sites to wish the Liverpool player a speedy recovery. Elliot then stressed it wasn’t the 22-year-old’s fault that he picked up an ankle injury.

Netherlands legends Ruud Gullit and Marco van Basten have come out in support of the Leeds United centre-back. 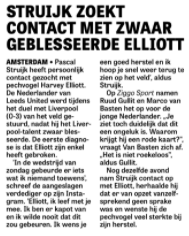 “You can clearly see that this is an accident. Why does he get a red card?” said Van Basten.

According to De Telegraaf, Struijk contacted Elliot on Sunday and stressed it was not his intention to cause harm and wished the Liverpool player a speedy recovery.