Three Eredivisie titles with PSV was just what Phillip Cocu needed to get his managerial career off to a good start and attract interest in his services from outside of the Netherlands.

He chose to move to Fenerbahce, having been promised the world by the Turkish club. Subsequent transfer restrictions saw him hit problems immediately and then there was trouble in the camp.

Officials started briefing against Cocu early on and he ended up out after just a few months in the job.

The Dutch media were therefore concerned about their compatriot’s next move, and when Derby County appeared it was insisted Cocu had received strong assurances about backing.

That, again, didn’t come to fruition and when Wayne Rooney appeared on the scene it was felt near inevitable that the former England international would eventually end up in charge of the Championship club. 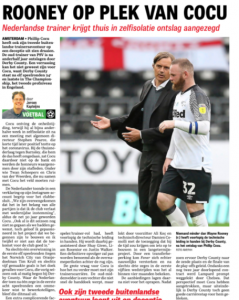 Despite a recent vote of confidence, results dictated that Cocu had to go, and now De Telegraaf states it was ‘not a good career move’ to take the job in the first place.

Cocu is described as a ‘fighter’ and he’ll certainly need that quality to bounce back from two big managerial failures. Now it’s thought it’ll be difficult for the Dutchman to get a good chance outside of the Netherlands, and it could be that a return to the Netherlands will provide the chance for him to get his career back on track.