Now fully adapted to the league, the 27-year-old talked about the difficulties he’s found in England and how different the game is from the football in his home country.

“I quickly adapted to the English game, it’s hard and with much more contact,” Tobias Figueiredo told A Bola.

“There aren’t that many fouls, there are many shocks and contacts thats are allowed. If I mark a striker in the box, he grabs me, I grab him and the referee doesn’t give anything. Whoever is stronger wins. I’ve evolved and I’m more mature, aware of the more intense style, of running and fighting, whereas in Portugal everything was more tactical.”

His adaptation to the Championship is said to be one of the reasons why he would not return to Portugal at this stage, also because potential promotion to the Premier League would give him the chance to compete with some of his idols.

“Between the first and the last, the game is very divided. I feel the Championship is a great showcase. If I had stayed in Portugal, I would only be better if I were playing for the big ones. So it’s not my goal to return, I believe that, at 27, I have that margin to reach the Premier League and see myself alongside Ronaldo, Bruno Fernandes and all the others. As a child I was a United fan, but in the Premier League any club is good.” 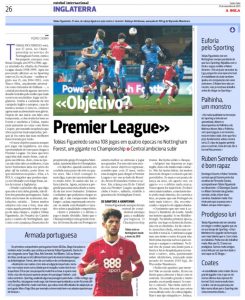 Speaking of the Portuguese players who’ve been at Nottingham Forest, he claims that some of his teammates didn’t have enough chances to succeed at the club.

“There really are many and it’s been an important connection. We often get together in a city that is quiet and where there is not much to do. It’s staying at home because it’s very cold and it rains, that’s the saddest part, but I can’t complain because I came here to play football.

“Gil and Diogo, now at Benfica, didn’t play much here, they didn’t have opportunities and that’s how it gets harder. It’s a different game, much more physical, which presents more difficulties for Portuguese to adapt. But Tiago Silva, for example, did very well and the fans wanted him to stay.”

Tobias Figueiredo was also asked about the incidents he’s had in Championship games. He mentioned a tussle against Patrick Bamford, and the resulting damage.

“The first thing that comes to my mind is Bamford from Leeds. I still remember playing against him at Middlesbrough. In my first time, my front teeth broke right away, it wasn’t just annoying, it was the elbow, I was going to get the ball, I was on his back and took it there. I continued to play without a tooth, and the other went backwards. I put a sponge in my mouth to stop the blood and continued. In the end I had to pull one tooth forward and I went to the hospital to rebuild the other one.”