Starting the season on the bench more often that not, Leroy Sané is quickly becoming someone Pep Guardiola can fully rely on at Manchester City as shown by the fact he has a goal and an assist in each of his last three Premier League games.

Only 21, the winger, who was bought for £45m from Schalke last season, is still learning, yet the fact he is currently the most expensive German player of all time doesn’t seem to be affecting him one bit.

In fact, speaking to France Football on Tuesday, the player said as much when asked that very question.

He explained: “I never think about it. What I cost, what it represents, frankly, doesn’t bother me. Like I tell my friends and players who ask me if I feel pressure, it’s not my fault that City paid so much for me.

“It’s like all the big transfers that happened this year, no player wants to have that pressure as no one asked to cost that much. That’s between clubs. That’s why, when I first came here, the only pressure I put on myself was to adapt and feel happy at City”. 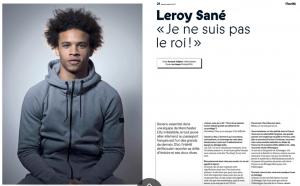 Even if he tries to ignore it, it must be quite difficult to avoid the expectations, especially those placed on you by the fans, who want their big money signings to perform straight away, as patience seems to be becoming less of a thing in the modern game.

He continued: “Regardless of the value of a player, as good as he is, no one is worth that much, really. We’re all human beings. It isn’t really fair to be judged on the fee, because, as I’ve said, we’ve never asked for it. We didn’t tell our club: ‘You have to pay this much for me’. That’s between them.”

While Sané was bought for a huge amount, it wasn’t for his achievements up until then, but more for the potential he has and the player he can turn into, which he knows full well.

He said: “All that bothers me is progressing, learning and to be at my best everyday and during games. To appreciate each moment and obviously win titles. Football is everything to me, it always has been… with my family and my friends, of course! It makes me really happy”.

Unaware that an English tabloid had named him the ‘worst signing’ at one point last season, the Manchester City starlet reveals none of that stuff bothers him, even negative replies on social media.