In July, we relayed news from Italy that Lazio were demanding a ridiculous fee of €70m from West Ham United for Felipe Anderson and Jordan Lukaku.

Manuel Pellegrini’s signed the Brazilian, while they decided against bringing the 24-year-old Belgian to the club. Saturday’s edition of Italian newspaper Corriere della Sera has a mention of why the left-back’s move to the Premier League outfit didn’t take shape.

The defender moved to the Stadio Olimpico in 2016 and since then has struggled with injuries and he is currently sidelined due to inflamed ligaments of the knee.

He had only 10 starts out of the 30 league appearances last season, and the report says the Belgian’s injury record means he can be more useful coming off the bench than starting the game.

Lukaku wanted regular playing time and therefore, he wanted a move away from Simone 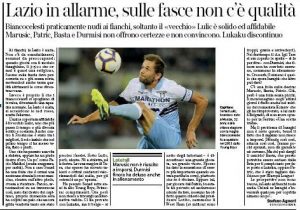 Inzaghi’s side and this is when Corriere della Sera mentions that no club, ‘not even West Ham’ were willing to pay Lazio chairman Claudio Lotito’s €10m price tag.

That sounds a lot less than in the summer, and it’s very telling if the Hammers wouldn’t even part with €10m.