Home Championship “It’s not easy… we must recognise it” – Club speak about signing...
SHARE

Martin Braithwaite made it clear during his time at Leganes that he was happy there and wasn’t really relishing the thought of returning to Middlesbrough.

He spoke to the Spanish media about not being a fan of Tony Pulis’ football, yet it clearly wasn’t just a managerial issue for the player, with him believing he’d hit the big time in La Liga.

Moving at the beginning of the January window, Braithwaite scored his first goal for Leganes against Real Madrid. It gave his club a surprise 1-0 victory but didn’t mean a great deal given Madrid had won the first leg of the Copa del Rey tie 3-0.

He then scored against Barcelona four days later in a 3-1 defeat, followed by goals against Rayo Vallecano and Valencia before the end of February.

The Middlesbrough owned player wasn’t able to keep it up, scoring only one further goal for Leganes, against Sevilla in May, but he’d already shown enough for the club to want to keep him.

However, it’s repeatedly been made clear in Spain that Leganes either can’t or won’t make the financial effort required to sign him permanently from Middlesbrough. 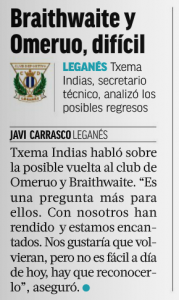 Wednesday’s edition of Marca quotes the club’s technical director Txema Indias speaking about both Braithwaite and Kenneth Omeruo, who was on loan from Chelsea: “We would like them to return, but it’s not easy today, we must recognise it.”

Middlesbrough wouldn’t mind the Denmark international sticking around, so they’re hardly going to make the deal any easier for Leganes.