The Colombian impressed at the Copa America so it’s no surprise to see him linked with other clubs, and Everton have been pulled into the picture this week.

Carlos van Strahalen, the player’s agent, has spoken publicly this summer about interest from elsewhere, but until recent days there hasn’t appeared to be any prospect of a big offer.

Sunday’s A Bola covers a €30m proposal from Everton, and it’s made clear that figure isn’t enough, something which has also been reported elsewhere in Portugal.

Porto are ‘not convinced’ by such an offer, and it’s made clear manager Sérgio Conceição is set against a departure for the attacker. There’s a glimmer of hope, with it stated the club are considering a transfer regardless, just not at the figures mentioned.

Diaz has a release clause worth €80m, and on Saturday it was reported they’d be looking for at least half of that. Porto will only receive 80% of a transfer fee, so at €30m, and subsequently €24m, they don’t feel it’s worth it.

There’s no mention of James Rodriguez in the report. 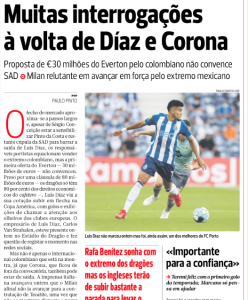 Van Strahalen was present on Saturday evening, as Porto beat Arouca 3-0, and shared an image of himself there on Instagram.

Diaz will now be expected to join up with Colombia for their internationals. It’s worth noting the country is currently on the UK’s red list for travel, meaning hotel quarantine is required to enter the UK and only UK nationals or those with residency rights can fly in.