Marco Stiepermann came up through the ranks of Borussia Dortmund’s academy and broke into their first team, but the attacking midfielder struggled to retain his place, which led to him being sent out on loan.

After struggling elsewhere, the Bundesliga outfit parted ways with him and the 28-year-old’s poor form continued until he joined Norwich City.

Daniel Farke arrived at the club in May 2017 and after three months, he signed the Dortmund-born player for the Championship side.

This term, Stiepermann has scored eight goals and registered six assists and with his contract running down in 2020, Sport Bild takes a look at his future at Carrow Road beyond next campaign.

Why? There’s an explanation for that. The Canaries are on the verge of achieving promotion to the Premier League and Farke wants to avoid making wholesale changes to the squad, avoiding what Fulham did last summer. 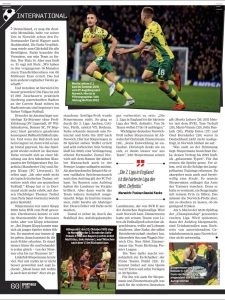 The Cottagers had three different managers this season and after spending in excess of €100m to bring several players to club, it did not help them to avoid relegation.

Farke doesn’t want to make Fulham’s ‘mistake’ in the upcoming transfer window so that they don’t drop to the Championship after spending one season in the Premier League.