Despite seemingly on their way down back to the Championship, Norwich City are using their current status to try and bolster their squad early, perhaps in hope they can compensate for potential exits in the summer.

Players such as Todd Cantwell and Emi Buendía are likely to be wanted men in the coming months, which is why the Canaries brought in Danel Sinani and are trying to sign Dennis Man from FCSB in Romania.

The forward has been in decent form this season, scoring eight goals and assisting another five in 29 appearances, and Thursday saw the emergence of claims Norwich had only bid £5m for him.

That didn’t go down well with the Romanian side, especially since they can now boast even more interest in their player, including one from a Champions League side. 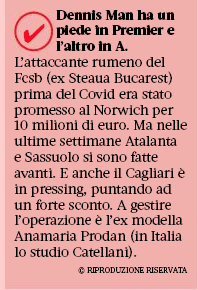 Gazzetta dello Sport on Friday explain that while it looked like Man was ‘promised’ to Norwich before the Coronavirus pandemic, Atalanta and Sassuolo have both come knocking for the 21-year-old, as well as Cagliari, although they could do so at a ‘strong discount’.

The price mentioned here by the Italian newspaper is €10m, although perhaps with a mini auction potentially taking place, FCSB can hope for a bit more.

West Ham have ‘sounded out’ club over player – Team ‘considering’...