Unlike the other promoted sides, Norwich City have been going about their business quietly this summer.

While Aston Villa and Sheffield United have spent big in the hopes of staying in the Premier League, the Canaries have so far spent little improving their squad.

Loan deals have been the order of the day so far for the club, and it seems they’re looking to continue in that trend with the capture of Sevilla defender Ibrahim Amadou.

Diario de Sevilla report today that Norwich are in discussions with the La Liga club over a move for the French defender. In fact, they state that Carrow Road has become ‘a clear option’ for him this summer.

Norwich initially offered a straight-up loan deal, but Sevilla want the chance to get rid of Amadou and will only consider loaning him if there is a compulsory purchase option in the agreement. 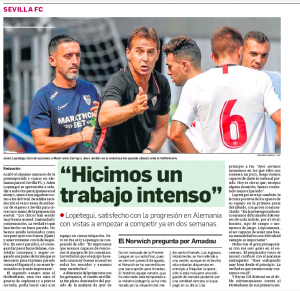 Estadio Deportivo back up the claim that Norwich are interested, adding that they are also looking at Amadou’s teammate Joris Gnagnon.

They also say that Sevilla want a purchase option in any loan deal or at least a compulsory purchase based on performance conditions, but believe that the La Liga club value Amadou at €10m rather than Diario’s £13m valuation.

Either way, it’s evident that the interest is there from Norwich and it seems the two clubs will be trying to thrash out a deal that suits all parties before Thursday’s deadline.