It’s been a relatively quiet window for Norwich City this summer, but one man who appears to be destined for Carrow Road is Ibrahim Amadou.

Yesterday we reported that he was on his way to the club after Norwich and Sevilla struck a loan deal this week.

That’s backed up by both ABC Sevilla and Diario de Sevilla today, with both newspapers saying Amadou will complete his move before deadline day.

The two newspapers agree that Norwich are paying between €1m and €2m to for the initial loan deal and that they have a purchase option included.

However, the two newspapers offer different prices on the latter point.

ABC believe it will take €9m to make the move permanent while Diario adds an extra million to that and say the agreed price is €10m.

Either way, an agreement is in place, and ABC say Amadou travelled to England yesterday to undergo a medical and will be announced as a Norwich player at some point today. 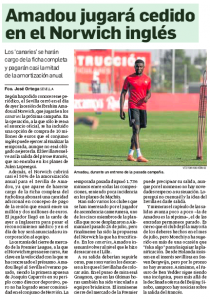