It seems Norwich City are unlikely to have a chance to sign Chiquinho from Moreirense this summer.

As reported by newspaper A Bola, the player’s future should be decided on Friday, with the 23-year-old having two options.

The situation is a bit complex, but not hard to understand. Benfica bought Chiquinho from Acadêmica last summer on a €600k deal, and despite having him in pre-season, they decided to let him go a couple of weeks later, this time on a free move to Moreirense.

They’ve kept, however, 50% of a future transfer and a chance to match any offers Moreirense get for the player.

A Bola reports that on Wednesday, Krasnodar made a bid of €9m for Chiquinho. So Benfica must answer in 48 hours, which is this afternoon, if they want to re-sign him for €4.5m deal. The last word, however, still belongs to the player. 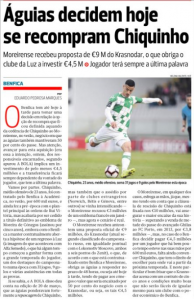 The newspaper claims that Genoa, Betis and Norwich City have all been interested in Chiquinho, who has nine goals and eight assists for Moreirense this season.

But with such an advanced stage of a transfer, it seems unlikely he will be a Moreirense player for much longer. Maybe Benfica could buy him now to make more money in the summer, but that’s just a possibility.

Chiquinho’s contract with Moreirense has a release clause of €10m. Perhaps that’s the only way of signing him without giving Benfica a chance to use their option.