The 20-year-old didn’t get regular football with the League One side and therefore, his temporary deal was cut short and he returned to Carrow Road.

Belgian newspaper Het Belang van Limburg sat down for an interview with the centre-back and asked the Canaries owned player why his loan deal with Blackpool was terminated.

“It was included in the contract that that option would be there. I played ten games for Blackpool, but to be honest: I had hoped for more, yes. Nothing to do about it. That happens in football. As a player you can only come out stronger,” he said.

He has now joined Belgian side Sint-Truidense on loan until the end of the season. As part of the deal, Norwich didn’t include an option to make his transfer permanent.

Bushiri explained the reason behind it.

“Of course [purchase option was not included]. It is not for nothing that they let me sign a contract for four seasons last summer,” Bushiri explained.

“By the way, it was already determined in advance that I would be loaned out in my first season. When I return in the summer, I still have three seasons to work my way up.”

The defender also explained how a conversation with Miloš Kostić convinced him to join Sint-Truidense.

“Yes, I had a conversation with him before I signed. The way the coach wants to play has convinced me to play for this club,” the Belgian stressed.

“A nice poster, huh. I see it as a good opportunity to lay a foundation with the new coach and to better understand what he expects from us. 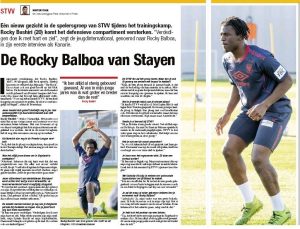 “Look, if a team picks someone up in January, it is with the intention of deploying him immediately. I may still miss a bit of match rhythm, but I am extremely hungry to play again.”

Bushiri will wear the number 3 shirt at Sint-Truidense and he remains hopeful of featuring regularly for them.