It’s now clear that Marvin Zeegelaar’s failed transfer to Norwich City didn’t happen because of a disagreement over the player’s wages.

The information had already been published by A Bola during all the mess of the transfer deadline day, and now they come with a few more details as CSKA are also interested in the player.

The newspaper claims that Zeegelaar had ‘one and a half feet’ in Norwich, as the club had already agreed a €3.75m fee for the transfer, which could include €500k more in performance bonuses. 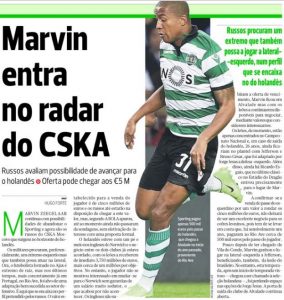 But the player only wanted the move for ‘a very good salary offer’, which wasn’t forthcoming.

Zeegelaar is still being used by Sporting, and the latest reports from A Bola claim that CSKA would now be keen on paying €5m for him.

At the time it was reported that Zeegelaar doubted Norwich City’s sporting ambitions, but since it’s transpired that it was more about the money on offer.