The attacker gave them a long interview about his farewell to Porto and the new challenge ahead of him in the Premier League.

Every time a new Portuguese player joins the Wolves, the usual talk is about the number of compatriots he’ll find at the club, and how helpful that is. He was asked if he already feels like one more in the wolf pack.

“I think so, I already realised that the group is strong and united. The wolf pack is ready to jump on the opponents [laughs].”

On his first chat with Nuno Espírito Santo, Silva said: “The mister welcomed me and told me to be calm, to be myself, and that things will happen naturally. I came to work, learn and help.”

Wolves spent €40m on the signing, making him a record transfer, but he claims not to be worried about it.

“It’s a number. It is normal for outsiders to speak, but the players skip that. For the player, this is never the most important data, as the focus is always to train and learn every day.” 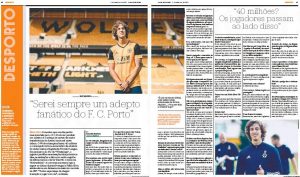 Fábio Silva claimed he’s been leaning English, but when asked if that’s the language spoken at Wolves, he says this is not really the case.

“They told me right away that it was going to be difficult to evolve in English, because the guys start to speak all in Portuguese. But I’m one of those people who likes to go into detail and I want to understand everything, so I will train my English. It’s a universal language.”

Asked if he needs to get stronger to succeed in the Premier League, Fábio Silva claims he’s been working on his physique before even thinking about the move.

“I find it funny, because for some time now I have been doing a different job on a physical level and I feel my body changing. It seemed that I already foresaw something, but no. It’s a part that I like and that I try to be more and more attentive to, because the demand of English football is high.”