It’s claimed that Real Madrid have got their eyes firmly fixed on making a move for the goalkeeper again, and have already set the wheels in motion on a potential summer transfer.

Whilst this was all being typed up in Spain, De Gea himself was at a Manchester United sponsor event for Tag Heuer. Spanish newspaper AS had someone at the event and they of course asked De Gea about Real Madrid.

“Nobody knows the future. The future is the future. I’m very happy at United, it’s a great club. In England football is much enjoyed. Madrid? I will not talk about that. On that 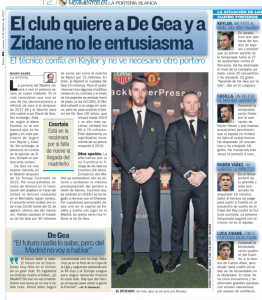 subject I will not talk any more. Now I must stay focused with my club.

“We are already in the final of the League Cup and we are still fighting for the FA Cup and the Europa League to continue making history in this club. We have to give the team time to win the Premier League again.”

It was the only way De Gea could answer really, unless he felt like completely ruling out a move to Real Madrid, which he clearly didn’t. During the last saga, De Gea was pretty much silent and that perhaps helped Manchester United fans so easily forgive his clear desire to leave the club. That, and him stopping the ball going into the net.

Full story on Marca’s ‘Operación De Gea 2’ splash. Feels like guff, but there’s likely something behind it. #MUFChttps://t.co/lr5cSxrlRf