Home Championship “There was no real need for me” – Player discusses regrets over...
SHARE

Anders Lindegaard swapped Manchester United and West Bromwich Albion in the summer of 2015.

The goalkeeper had less than a year left on his contract at Old Trafford at that point, but the Red Devils allowed him to join the Baggies on a free transfer, where he signed a two-year deal.

Tony Pulis was then in charge at The Hawthorns and apart from the Dane, he had the services of Boaz Myhill and Ben Foster as the other two goalkeepers in the squad.

Foster was forced to spend time away from the pitch in the first half of the 2015/16 season due to an injury, but Pulis preferred Myhill ahead of Lindegaard, forcing the latter to spend time on the bench.

Lindegaard gave a lengthy interview to Danish newspaper Ekstra Bladet, where he admitted he was wrong to join West Brom and why his situation at the English side was frustrating.

“We all like to play at the highest level as possible, but I should perhaps have chosen something other than West Bromwich, when I left United at the time,” he said.

“Ben Foster was the first choice keeper, but he was injured. Then Boaz Myhill was the backup. He didn’t impress me at all when we were training, but when we were playing a game, he was brilliant.

“It was so frustrating. He just delivered any given Sunday. Excellent saves, good performances. So, I wasn’t sitting there with a feeling of why the hell I wasn’t playing.” 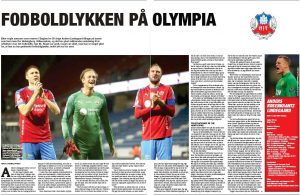 “At that point, I had come to a place in my life where I could see what was right and wrong, and I could see that changing a goalkeeper would be wrong.”

“But when I had been there for half a year, Ben Foster got fit, and then it was quite clear they really just had to use a goalkeeper until Foster was ready and Myhill had not delivered at that level.

“Then I stood there with a year and a half left on a new contract, and there was no real need for me there.”

Lindegaard then joined Preston North End on a loan deal in January 2016 before making his transfer permanent later that summer.