Home Europe ‘No one comes close’ – With Manchester City charging ahead with signing...
SHARE

Earlier on Thursday, we carried a report from A Bola, who explained Manchester City ‘are ahead of’ Manchester United and other suitors in the race for Sporting star Nuno Mendes.

It was also explained the Cityzens have reserved €60m to sign the left-back this summer.

The 18-year-old was a regular for the Portuguese club’s title winning campaign, and his fine displays have caught attention of top clubs in England and across Europe.

His form helped him make his debut for Portugal in March and has now made it Fernando Santos’ squad for Euro 2020.

Record claim Mendes deserve to be the first choice left-back for his national team at the continental tournament.

They state: ‘In the last forty years, we’ve had some quality left-backs. From Álvaro, who was a powerhouse without technique, to Dimas and Nuno Valente, more technically endowed, it was not by the left flank that we limped.’

‘With due homage to these and other names that served the colours of Portugal, no one comes close to the potential splendour of Nuno Mendes. The young defender of Sporting has a left foot that is sometimes a spoon, sometimes a baseball bat, to make the most excellent fullbacks, envy.’

The newspaper further add Santos must make room for Mendes, who has been the 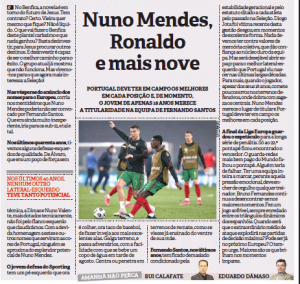 country’s best left-back in ‘recent decades’, making fewer mistakes despite being only 18 years of age.

With City leading the chase for Mendes, the young player is now receiving praise, with Record arguing why he should start for Portugal at Euro 2020.

If he continues to impress with the national team, there’s a possibility the suitor list could continue to grow further.