On Monday, Sky Sports reported they believed both Atalanta and Fiorentina had seen bids for Pedro Obiang rejected by West Ham.

What’s interesting here is this news was received with some mild surprise in Italy, especially in Bergamo (where Atalanta is based), with none of the local media aware of an interest prior to this information being made public.

Gazzetta dello Sport pick it up on Tuesday, explaining the West Ham midfielder is one of a few options Atalanta are looking at to bolster their midfield, alongside Nice’s Adrien Tamèze and Bordeaux’s Lukas Lerager.

However, over at Corriere della Sera’s Bergamo edition, the angle is rather different, with Zenit St-Petersburg’s Matias Kranevitter top of the Serie A side’s list. with Sporting CP’s Rodrigo Battaglia second. 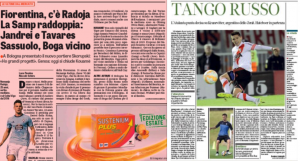 The West Ham man gets a mention, explaining he’s the latest man to have been added to the list, but that the club face competition from Villarreal, which was also in the Sky Sports report.

Neither mention a bid, and you’d expect the local newspaper to get rather excited about their club making moves for a Premier League midfielder with Serie A experience like Obiang.

As things stand, they haven’t even made an offer for Kranevitter, their top target.

As for Fiorentina, Corriere Fiorentino don’t even mention Obiang as an option for their midfield.