Compared to the usual rehashed articles that are often published in the Italian media, we have some actual news regarding the future of Kalidou Koulibaly.

At least, we now know where he won’t be going, and that’s Paris Saint-Germain.

The centre-back, often sent to either Manchester United, Liverpool and the Ligue 1 champions, appears to be on his way out from Napoli.

The French side were supposedly his favourite destination after the player bought a flat in Paris, but that simply isn’t the case. 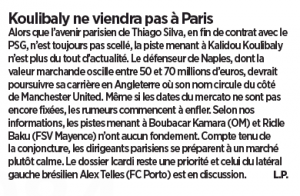 According to Le Parisien, the road leading to Koulibaly ‘is no longer topical’, and the defender ‘should continue his career in England where his name circulates over at Manchester United’.

The newspaper explain that Paris Saint-Germain’s transfer market is expected to be ‘rather calm’ with the only priority being keeping hold of Mauro Icardi, while there are talks ongoing for Alex Telles.

This means Manchester United, and possibly Liverpool, should have a clearer path to signing the Senegal international (valued somewhere between €50-70m) if that is indeed their desire.