As Antonio Conte found out once again on Wednesday night, his Inter team aren’t quite ready to mount a full title challenge just yet.

The 0-0 draw against Fiorentina showed some more work is needed, and it appears he has his mind set on improving the midfield, with N’Golo Kanté at the top of his wishlist.

However, should that not materialise, there are other names that can be considered such as Tanguy Ndombélé, currently unhappy at Tottenham.

The French midfielder has struggled under José Mourinho and made it clear last month he wanted to leave the London club, no longer wanting to work under the Portuguese manager.

This opened some doors for clubs who liked him during his time at Lyon, and Inter are one of them. 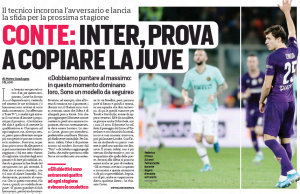 Corriere dello Sport reported on Wednesday that the player ‘can already leave London’, and the Serie A side are ‘studying a plan’ that would see them put together a ‘swap with Marcelo Brozović’.

It’s stated the Croatian midfielder is ‘no longer seen as fundamental’ in Conte’s plans, meaning he could be sacrificed if it meant another player coming in that would suit the Italian’s tactics going forward.

It appears to just be an idea for now, but we’ll be keeping an eye on it in case it starts growing a mind of its own in the coming weeks.