Impressing greatly for AS Monaco under Niko Kovac, Aurélien Tchouaméni has caught the eye of many clubs around Europe.

Chelsea have been linked a number of times, and that continues to be the case, as Thomas Tuchel seemingly continues to strive for a better squad at Stamford Bridge.

Currently top of the Premier League, the Blues will want to ensure that remains the case come the end of the season, and with a Champions League to also defend, a strong squad is needed, which the Frenchman could greatly contribute to.

Tuttosport cover Juventus’ interest in the player once again on Tuesday, explaining that his ‘explosion’ this season, which has seen him become a regular for France under Didier Deschamps, has ‘made his price rise and enlarged the number of suitors’. 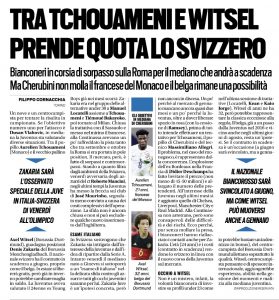 That’s where Chelsea are mentioned, with the price touted being ‘no less than €45-50m’, and the Serie A side are ‘aware of the difficulties and risks’ of pulling off a deal for the AS Monaco star.

Something to think about as we approach the January transfer window, although we would be surprised to see the principality club agree to sell a key player midway through the season, knowing full well they could get even more in the summer if he continues to thrive as he has done so far.