Sergej Milinkovic-Savic has finally returned to Lazio after his holidays, and it’s made quite the splash in Wednesday’s Corriere dello Sport.

After all, the Serbian midfielder suddenly became the centre of interest once again following Mino Raiola’s public statements over Paul Pogba’s future at Manchester United, with the Red Devils supposedly turning to their former target immediately.

Since then, there’s been a lot of speculation, with some outlets claiming offers while others deny anything has arrived on Claudio Lotito’s desk.

Corriere are part of the latter group, with the only bid “discussed” is the €75m one Marca claimed Manchester United made, although that has yet to be fully confirmed by anyone. 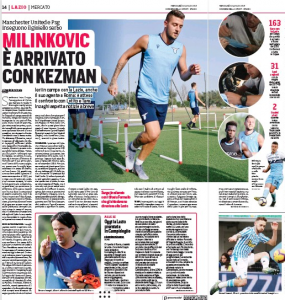 Milinkovic-Savic reportedly remained silent when attending fans asked him to stay at the club this season, and the Italian newspaper explain the ‘agreements’ between Lazio and Mateja Kezman are the same as last year, which are the agent needs a €100m to free his client.

This is a bit lower than the €120m Gazzetta dello Sport said would be needed to sign the Serbia international, and Corriere do point out the only way Manchester United would move for the 24-year-old is if Pogba leaves.

A meeting between Mateja Kezman and the Lazio board is expected to take place on Wednesday, meaning we might get some more information in Thursday’s newspapers.

Sought-after player has ‘five offers’ in front of him ‘including ones...